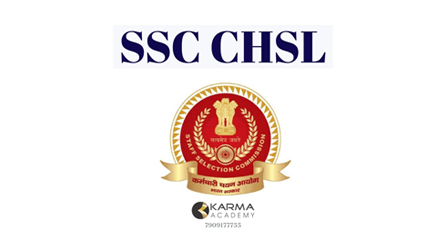 SSC is holding the SSC CHSL exam for the recruitment of LDC/ JSA, Postal Assistant/ Sorting Assistant and DEO respectively. Since there are so many vacancies available, we strongly recommend you to apply for the SSC CHSL exam at the earliest.

SSC CHSL exam has three different phases that candidates need to clear to get selected for various posts in the Government Offices. SSC CHSL Tier I is Objective Multiple Choice Question paper, Tier II exam is Descriptive Paper in English/Hindi, while Tier III is the Computer Proficiency Test

SSC CHSL Tier-II is a descriptive test that is conducted to test the written skills of candidates in English/Hindi. The paper involves writing of an Essay of 200-250 words and Letter/Application writing of about 150-200 words. The minimum marks that a candidate needs to qualify SSC CHSL Tier-II are 33 per cent.

• The total time duration of the exam is of 60 minutes and total marks are 100 marks.

• All the questions are based on the concepts of 10th standard.

• The total time duration is 80 minutes for candidates who are visually handicapped or suffer from cerebral palsy.

The Tier III of SSC CGL comprises of a couple of skill tests which are needed for selection to certain government posts.

SSC CHSL is conducted in three different levels, the syllabus of all the three levels is different. All candidates must be well-informed about the latest changes (if introduced any) in SSC CHSL syllabus and exam pattern to prepare for SSC CHSL.

This paper calls for candidates to write an essay and Letter/Application that tests their writing skills of the candidates. The essay topics will be related to National Interest, Finance & Economy, Ecological Issues, Politics, Social Issues, Schemes & Governance, Sports, Technology, Geopolitics, Environmental Concerns etc. While, the type of letter/ application asked will be Application, Complaint, Suggestion, Official Appreciation, Follow up or Feedback etc.

Tier-III of SSC CHSL will be a Skill/ Typing Test of qualifying nature. The final merit of the selected candidates will be based on the basis of total score obtained in Tier-I and Tier-II.

In this test, a candidate should have data entry speed of 8,000 (eight thousand) Key Depressions per hour. Duration of the Test is 15 minutes and English document having about 2000-2200 strokes/key-depressions is given to type.